CAMBRIDGE, Mass., Oct. 6, 2020 (SEND2PRESS NEWSWIRE) — NED Biosystems, an innovative clinical-stage biotech company developing therapies for cancer and the novel coronavirus, is pleased to announce that Michael Mansour, MD, PhD, will serve as the Company’s Medical Advisor of Infectious Disease. Dr. Mansour brings a wealth of expertise in infectious disease research where he leads an independent laboratory at the Massachusetts General Hospital (MGH). He is a leading authority guiding investigative studies on COVID-19 treatments and biomarkers which includes serving as Principal Investigator for Phase 3 COVID-19 studies. 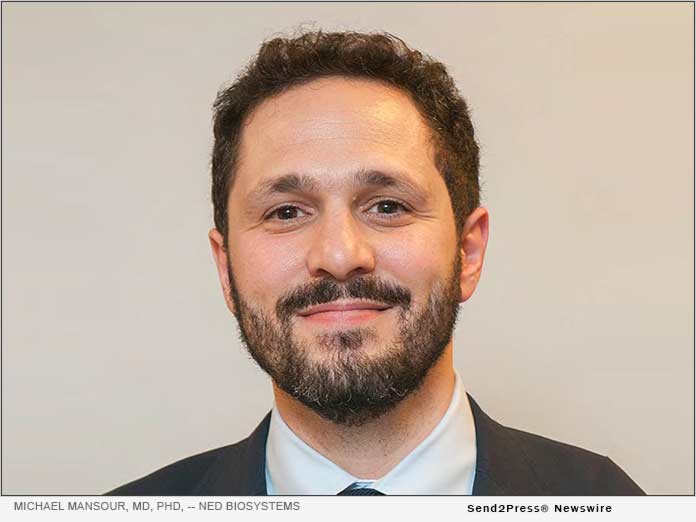 As Medical Advisor, Dr. Mansour will direct NED’s clinical trial initiative for NED-260 to establish the treatment’s safety and efficacy for COVID-19 patients. NED-260 is a rationally designed, combination treatment that has the potential to address COVID-19 viral replication and entry based on its multiple mechanisms of action. Through its multifaceted approach to address major processes integral to COVID-19’s progression and how it infects the cell, NED-260 may fulfill a critically important niche in the treatment and prevention of mild-to-moderate illness in the majority of people who are at risk for COVID-19 infection. NED is planning to conduct a Phase 2, randomized, placebo-controlled study of NED-260 in mild-to-moderate COVID-19 patients.*

“This study offers a chance to look at an oral treatment for COVID-19,” said Dr. Mansour. “Taken directly after diagnosis, the combination is aimed at interrupting disease progression – and potentially speeding up a patient’s recovery time. The trial will also explore the use of NED-260 as a potential prophylaxis, to prevent infection.”

“The contribution of Dr. Mansour’s expertise and considerable insight will be invaluable as we establish the safety and efficacy of NED-260 as a COVID-19 treatment,” stated Rebecca Lambert, Founder and Executive Chair of NED Biosystems. “We are eager to commence the NED-260 clinical trials with Dr. Mansour’s seasoned guidance. The time is now to develop an early treatment solution and preventative of infection.”

“Dr. Mansour is an outstanding addition to our team of accomplished medical advisors at NED Biosystems,” stated Dr. Geoffrey Ling, Office of the CEO, Scientific Advisory Board, Board of Directors, NED Biosystems and advisor to the U.S. Government’s COVID-19 Task Force. “His prominence in the field of infectious disease research and deep expertise will help propel our efforts to bring our uniquely comprehensive treatments to the broader patient community. We are delighted to welcome him to the team.”

Dr. Mansour leads a team of medical research scientists at the Mansour Laboratory that focuses on developing novel cellular diagnostics and therapies for invasive fungal infections. He is also a practicing physician specialized in infectious disease at MGH. Dr. Mansour obtained an MD and PhD from Boston University and completed his residency and served as a fellow at the MGH.

Based in Cambridge, Massachusetts, NED Biosystems is a clinical-stage biotech company developing innovative treatments to provide multifaceted approaches to affect multiple key disease processes. Beginning with a focus on patients and their families, NED seeks to dramatically improve patient outcomes with combination treatments comprised of agents with well-established safety and tolerability profiles. NED’s treatment approach is to afford patients high quality of life. Due to ease of oral dosing and cost-effectiveness of the treatments, the company aims to provide revolutionary, efficacious treatment solutions to patients not only in the U.S. and other developed nations, but also in economically challenged regions globally.

*NED-260 is pending approval by the FDA post clinical trials.

Biotechnology company NED Biosystems is developing a novel therapeutic that integrates 7 compounds into a single orally administered treatment regimen for patients with late-stage cancer. The company, based in Cambridge, Massachusetts, has landed a patent from the US Patent and Trademark Office that it believes is the first issued to protect the composition of matter for a formulation containing this number of components.

The therapeutic, NED-170, consists of the FDA-approved chemotherapy drugs cyclophosphamide, metformin, and naltrexone combined with the naturally occurring compounds curcumin, melatonin, α-lipoic acid, and genistein. Investigators for NED Biosystems hypothesize that these 7 components, when combined in a regimen involving particular doses and timing, offer a new treatment option for patients with advanced cancers that progressed through standard therapy.

“Patients who have exhausted standards of care have limited treatment options. They can go into phase I clinical trials, they can recycle chemotherapy drugs, or they can opt for the palliative care pathway,” Edward Garmey, MD, chief medical officer and chairman of the scientific advisory board at NED Biosystems, said in an interview. “NED170 has been created with the view that there needs to be another pathway available for these patients that is predicated on tumor control combined with quality-of-life preservation.

“It’s a big goal, and it certainly represents a paradigm shift for what’s currently offered to [patients with] late-stage cancer, but we feel it’s an achievable goal,” Garmey added.

Garmey said the company is finalizing the protocol for a phase I/IIA clinical trial to investigate the safety and efficacy of NED-170 in 10 patients with treatment-refractory triple-negative breast cancer and 10 with refractory cholangiocarcinoma. The FDA allowed the company to bypass the typical dose escalation required in phase I studies because the drugs involved have been demonstrated to be safe and effective in clinical trials. NED Biosystems expects to begin enrollment in the second half of 2019.

The company eventually plans to investigate the combination in other types of cancers, including breast, head and neck, and leiomyosarcoma.

NED Biosystems Inc., a Cambridge, Mass.-based venture developing a seven-agent combination therapy for cancer, has secured a U.S. patent for the treatment, called NED-170. The oral regimen, which comes in a daily seven-pill pack, targets both angiogenic and immune response pathways for the potential treatment of several types of cancers. If successful, it could potentially help not only extend lives, but also drive down the costs of cancer care in certain cases.

The company’s name is pronounced letter-by-letter as an acronym for “no evidence of disease.” It was founded in 2013 by Rebecca Lambert, whose younger sister was diagnosed with stage IV leiomyosarcoma and told that she had less than a year to live, a prognosis made especially heartbreaking since she had a young son. Lambert, who was working on Wall Street at the time, quit her job to help her sister, eventually connecting in that mission with Harvard University’s Judah Folkman, a late scientist known for his research on tumor angiogenesis. With his help, Lambert built a team that put together a regimen of drugs that helped her sister live for nine years, a refinement of which now forms the heart of NED-170.

Lambert, now chairman of NED’s board, told BioWorld that “my goal for my sister’s therapy in 2001 is identical to ours at NED today, to chronically control cancer’s growth and spread, permit patients to significantly extend life and live life with the full quality we associate with health each day.”

To support that work, the company has raised more than $3 million out of an anticipated $10 million series B it expects to close before the end of the second quarter. An earlier series A round provided the company with $1.5 million in 2015.

As patented, NED-170 contains a mix of three generic drugs, cyclophosphamide, metformin and naltrexone, and four GMP-grade natural products, alpha-lipoic acid, curcumin, genistein and melatonin. “The seven compounds are all selected so that they have very specific biological activity because we want multiple driver processes of cancer,” CEO Marc Blaustein told BioWorld. Each is given at a dose that’s known to be well-tolerated and has been selected to avoid drug-drug interactions, he said. Taken together, the medicines act to target two fuel supplies of growing tumors — angiogenesis and metabolism — while simultaneously aiming to boost immune response and apoptosis.

To test expectations for the combination, the company is gearing up for a small phase I/II trial which its team hopes to begin around the middle of this year. The open-label study is designed to enroll 10 patients in each of two arms, one focused on the rare cancer cholangiocarcinoma and the second testing the regimen in triple-negative breast cancer. Blaustein said he expects the trial to take about 18 months to run. In addition to safety data, investigators will also be looking for additional tumor response using RECIST criteria, progression-free and overall survival.

If successful, the company will decide whether to seek a partner to proceed with its work, raise additional capital or potentially go public, Blaustein said. Initial plans also include running a registration-directed cholangiocarcinoma trial to support a 505(b)2 new drug application while also looking ahead to phase III studies in other indications or potentially a basket trial.

The company announced Thursday that the U.S. Patent and Trademark Office has awarded it U.S. Patent No. 10,195,219 for NED-170, a protection that expires no earlier than 2034. Blaustein said his team is also pursuing intellectual property protections in other major markets.

As a Delaware Public Benefit Corporation, the company is also aiming to make a positive impact on the world by providing an at-home, low-toxicity therapy. “That goes with our quality-of-life focus,” he said. “But it also means that the costs that you typically associate with cancer care, including managing intense side effects and special delivery at infusion centers, you should be able to avoid with NED-170, meaning it could be very effective for overall cancer treatment.”